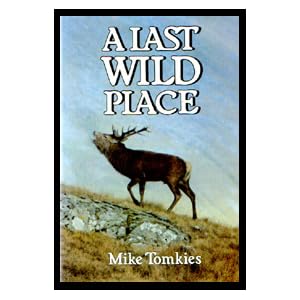 I have just finished reading this excellent book by Mike Tomkies and can thoroughly recommend it to anyone interested in Scotland, the Highland flora & fauna and preservation of wilderness. I don't intend this to be a book review so you'll have to find a copy yourself and read it! I found that his thoughts from the last couple of paragraphs struck a chord, and here they are:

"In Nature's teeming world the animals and birds are working hard to fulfil their destinies. The feeling came strongly upon me that we, who evolved from original creation to become the dominant species, with unique gifts of intelligence, foresight and the ability to love spiritually beyond ourselves, have an inherent and inescapable duty to act as repsonsible custodians of the whole inspiring natural world. We are the late-comers, it can only be ours on trust.

If we let it down then we also let down its creator; and if even if we don't believe in God, conservation of the natural world and its ability to inspire our finer thoughts - for only thought can change the world - is without any doubt whatever a necessary ethic for our own survival. The kingdoms of the wild evolved in creation not for mere man to plunder, to satisfy greed under the guide of progress, and to finally destroy, but both to enjoy and enhance. If we fail to learn from the last wild places we may yet create a hell on earth before we too pass along the road to extinction, the fate of all dominant species before us. Spiritual unease has long been mainfest. The lessons will not wait for ever to be learned."

Whilst we may have differing philosophies, I think the sentiment contained in these words is one most people will agree with.

If you want to read the book, then I suggest checking out Amazon.

Back in April, I bought a POE Peak Elite AC from Backpackinglight.co.uk. I had looked at the other options and felt that it had the best spec for the money. It was light, packed down pretty small and generally looked like it would do the business. When it arrived I was super impressed by the pack size (I was switching from a TAR-based sleeping system, and with the best will in the world you are not going to get a prolite wrapped up that small!), and the weight. I duly unrolled and inflated it and had a lie down. It seemed reasonably narrow but not unusable. What made it unusable was the fact it wouldn't hold air. After the "bath" test it became apparent that one of the seams between the tubes had a leak.

After a quick email to Bob and Rose at BPL, I had a new one. Which has now developed a leak after four nights use. A further "bath" test has not revealed where the leak is coming from, but there is definitely one somewhere. Searching round the internet it did not take long to discover that I was not the only person to have experienced this problem. For example, Mark's Walking Blog details his experiences. I emailed BPL and got a reply from Bob, who was most sympathetic, having had the same problem on the first day of his TGO Challenge this year! Four nights sleeping on two sit mats does not sound like a great start to a 200 mile hike. Bob has offered a refund, replacement with the 3/4 length POE Peak Elite AC, or change to TAR NeoAir. I'm not sure which option to take. So here's my appeal to the outdoor blogosphere: help! Any suggestions or recommendations are gratefully received.

Things to bear in mind: I already have a couple of thermarests (prolite and standard), so I can't really justify having loads more mats, so this one will have to be it. I don't want to spend a tonne more money. Pack-size and weight are important, but comfort and reliability more so.

Here's a list of some of the contenders that I'm considering:

It's hard to see past the Exped although it is heavier than I would like, particularly compared to the Peak Elite. Anyway, over to you!

Well, I went with the NeoAir in the end. I really liked the look of the Exped SynMat UL, but there appears to be no stock in the country and won't be until mid-October. So I popped over to Malvern to see Bob and Rose at BPL and swapped the Peak Elite for a NeoAir. Excellent service as always from BPL, thoroughly recommended.

Initial thoughts on the NeoAir? I think it is a little bulkier than the Peak Elite, but not awkwardly so. It feels very comfortable, comes with a stuff sac and patch kit, and seems well made. Maybe a little run out next month to test it in the wild..?