Where's This Do You Reckon?

After my dull trudge to Tewkesbury on Wednesday, the opportunity for a more interesting stroll arose today. A pat on the back for the first person to guess which one of Britain's mountain ranges this photo was taken on: 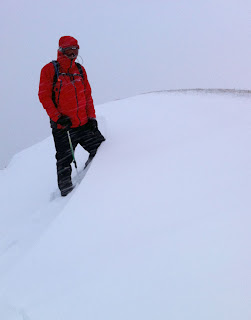 Any takers? Brecons? Cairngorms? The Cotswolds? Yep, the Cotswolds! We had a bit of snow this morning and by about 11a.m. it was starting to thaw. Then at about 12:30 it started coming down with a bit more seriousness. I walked round to Chris' place for about half one, and after a bit of fun with his new snow blower, we jumped in to his car and set off for Cleeve Hill. The road up Cleeve from Prestbury was pretty treacherous so we parked at Southam and then headed up through Queens Wood, enjoying the untracked path. Just before we left the relative shelter of the woods, we donned goggles and did our various zips and flaps up. Tracking on up the hill through knee deep snow was great fun. No other souls were to be seen as it was getting on for 4 o'clock and it felt really good to have the place to ourselves. Once on the top we headed towards the trig/viewpoint which marks the high point of Cleeve Hill at 320m (I believe). 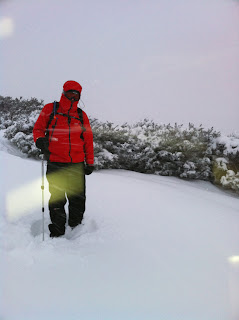 We headed on, now dropping down towards The Rising Sun ( a pub, not the centre of our solar system) for a well deserved Guinness. After a brief warmer, we set out again down the dark and very lightly used road towards the car. 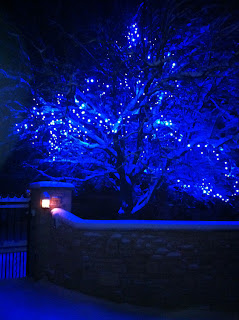 Seen in Southam as we returned to the car.
The roads in Cheltenham were nuts, they had been polished to a sheen and were completely without traction. One day I'll have my crampons with me when I need them...

As an aside, this was the first proper test of my new Rab Latok Alpine jacket. I took my Mountain Equipment Kongur back to Cotswold Outdoor after my walk in the Brecons last month, where it failed to breathe in a quite spectacular fashion. I swapped it there for the Rab, which uses eVent rather than GoreTex ProShell. Overall, I'm pretty happy with it: it's lighter and feels more flexible without the multitude of front pockets that the Kongur had, and although there was a little dampness within when I took the jacket off in the pub, it was nowhere near what the Kongur had contained. I thought the hood was pretty decent too, moving nicely with my head. The only thing I'm not struck on are the hood drawcords, which are not tethered and so can whip about when the hood is pulled tight. To get round this I pull them tight and then pull the cord back through the toggles to get a loop (if that makes sense?) It's not a great feature for a mountain jacket to be honest. Other bits that performed well: Berghaus Deluge overtrousers, Craghopper winter lined Kiwi trousers (hmmm...toasty) and my new fleecy Buff. Oh yeah, and my TGO subscription offer TrekMates drybag!

Anyway, I hope you're having fun in the snow wherever you are!

Thanks to Chris for bravely taking his iPhone 4 out of its nice dry pocket in order to snap the pics used here!
Posted by Kenburg at 20:08 No comments:

For a variety of reasons too dull to go in to here, I walked from Cheltenham to Tewkesbury yesterday. As time was of the essence I walked on roads and lanes rather than on footpaths and bridleways. It was about 9.5 miles and took me about 2.5 hours, and was just a real grind. Although I avoided main roads for a large part of the walk, I was never very far from the M5 and it's continual dull roar...

It was a useful exercise though. Physically, I felt OK covering the distance non-stop. What was harder was the dull, and in places, depressingly grubby road I was following. I had to really tell myself to just get on with it.

Hopefully with the snow that's forecast for the end of the week, I might be able to have a shorter but more scenic walk on Saturday.
Posted by Kenburg at 07:25 No comments:

The Thoughts of W.H. Murray 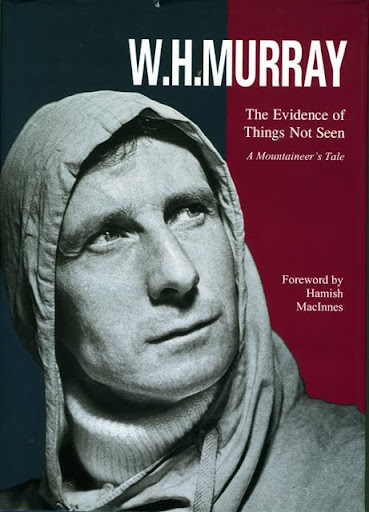 I've recently been reading W.H. Murray's autobiography "The Evidence of Things Not Seen - A Mountaineer's Tale". It's a fascinating and well written account of his exploits as a climber, a P.o.W., an explorer and a lover of wild places. If you get the chance to read it, I thoroughly recommend you do!

Anyway, at the end of the section dealing with his exploration of the Himalaya, he muses over his experiences and the lessons learnt. I thought this bit might be encouraging for those entered for the TGOC 2011, and those others, like myself, who are planning ahead for 2012. I quote:

"Until one is committed there is hesitancy, the chance to draw back, always ineffectiveness. Concerning all acts of initiative and creation, there is one elementary truth, ignorance of which kills countless ideas and splendid plans: that the moment one commits oneself, then providence moves too. All kinds of things occur to help one that would not otherwise have occurred. A whole series of events issues from the decision, raising in one's favour all manner of unforseen incidents, and meetings, and material assistance, which no man could have dreamt would have come his way. I have a deep respect for one of Goethe's couplets:

Whatever you can do, or dream you can, begin it.
Boldness has genius, power, and magic in it"
Posted by Kenburg at 16:38 2 comments:

Not much fun being a window cleaner in this weather. I worked on Monday and most of my kit froze solid, and I had to spend a happy 15 minutes deicing windows on an unheated conservatory that I had started to clean...

So as the weather here was even colder yesterday I went for a stroll up on to Leckhampton Hill. We've had some odd weather here this week, it's not snowed but the fog has been freezing so everything is getting covered in a sort of hoar frost. It all looks very pretty. 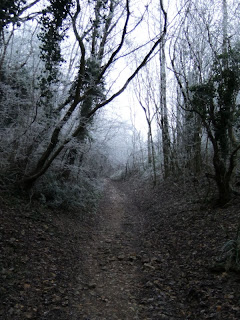 On the way up Sandy Lane. 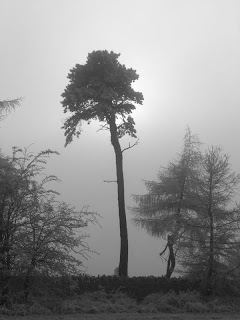 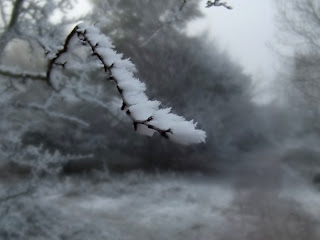 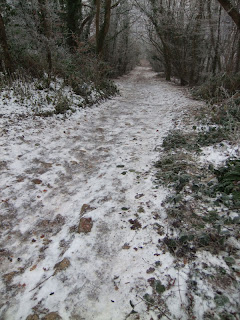 Wish I'd brought my crampons! Steep and very slippy!
Posted by Kenburg at 08:21 1 comment: