The phrase “wind farm” provokes more of a reaction from the U.K. outdoor community than almost any other, being eclipsed only by “shall we stop here for a pint?” and “how heavy are your titanium underpants?”

Are they the right solution for renewable energy? Should they be stuck up all over the beautiful, wild parts of the country? How can I get a slice of the enormous pie? (I’m back to wind farms here, not titanium underpants.) All good questions, none of which it is my intention to answer here. Thinking about it, I may come back to the second one, we’ll see.

No, actually what I was going to muse over was the human impact on wild landscape generally. This was triggered in part by my walk in the Cairngorms but also by a number of things I have read recently. We like to immerse ourselves in wild places, to camp, walk, sit in these places and soak up their unspoilt beauty. When we’re not out there we like to talk about our experiences and to read those of others, to pore over photographs and maps, to plot and plan our next escape. Yet how many of the places we go to are as unspoilt as we think?

I found it surprising when I was in the Cairngorms (a National Park) at just how obvious the hand of man was on the landscape. Chris and I walked to Derry Lodge up a wide, well surfaced track. When we arrived we found four buildings (the Bob Scott Memorial Hut, the lodge buildings and the mountain rescue post). To get over the rivers there were bridges. Heading north we found fenced off areas of trees, and then the Refuge of Avon. Once we reached Faindouran Lodge (two buildings) we picked up another wide vehicle track. In places, where there presumably had been a need for gravel to level the track, great scoops had been taken out of the hillsides, which now were eroding away. We passed more lodges, tracks, bothies and bridges, and a truly spectacular mess of rock, pipes and tracks where the Allt an Laoigh joins the Avon. Then when you look up, many of the hills are zebra-striped with controlled heather burns. Certainly not unspoilt! Travel to other mountainous areas of the British Isles and if it’s not bothies and bridges then it’s sheep grazing, hydro schemes and hard surfaced paths to the summits of popular and convenient peaks. 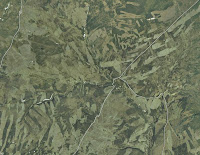 I’m not knocking these things, the tracks, bridges and lodges made our journey much easier than it would have been without them. The heather burns and other landscape management are vital, so we’re told, for the ecology and economy of the area. But what struck me then, and has been emphasised since in my reading, is that these are simply the latest in a long list of landscape exploitation.

I found a copy of “The Shell Guide to Reading The Landscape” by Richard Muir, which is a fascinating and comprehensive discussion of human interaction with the British countryside. One of the points he makes early on is that the deforestation of the British Isles commenced in Neolithic times (2500 B.C.E.) and large inroads were made in to the blanket coverage of woodland that existed prior to that. I’m picturing in my head some sort of Neolithic Hippy, railing at the axe-wielding proponents of “advancement” as they levelled great swathes of the forest. Richard Muir suggests that by the time the Romans rocked up, they would have found England a land largely cleared of forest, with pockets of tended woodland. Interesting, I thought. In his “A History of Scotland” Neil Oliver describes the move to farming in the Highlands (4000 B.C.E?) which resulted in forests being thinned and eventually cleared. One final reference that I recently came across is found in Hamish Brown’s “Hamish’s Mountain Walk”. In the chapter “Fada-Fannich” he mentions the much later ironworks at Letterewe. Local oaks were felled to feed the furnaces, seven of which were burning at one point in history. How much fuel would an iron smelting furnace require a year? Hamish says that each one would consume 120 acres of Oak woodland in twelve months!

This leads me to the following, two part, conclusion. One: that the landscape we consider to wild, unspoilt, inspiring is largely that way because it’s been exploited like mad, then managed, then exploited, etc., etc. And the other point is that when “progress” or financial gain is involved it’s very difficult to stop people taking what they want from the landscape, with little or no thought for the long-term consequences. They’ve been doing it for 4000 years!

Rather than end on that depressing note, I think in some ways it should increase our resolve and determination to get out and joy the sights, sounds and smells of the hills, to appreciate what we’ve got, and perhaps to think about why it’s the way it is.