In my previous post, when I said sometimes it's right on your doorstep, I wasn't kidding. This morning I walked down to the main road, caught the 606 to Winchcombe (cost £2.10) and ten minutes later was setting off up the hill towards Belas Knapp. It was very convenient. 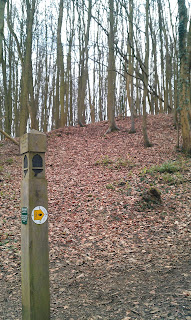 As before, I'm not going to go over the route in great detail, just point out some of my observations that may be helpful to those following in my footsteps. 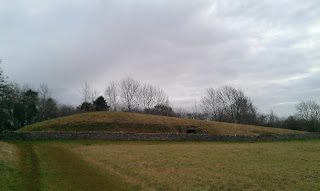 Interestingly, although the weather has been mild and unsettled, the going under foot was generally very good (apart from one section which I'll come to shortly). Very rarely was the ground slippery, more often than not I could feel the lugs of my Inov-8s biting into the surface. Probably the worst section overall was across the top of Leckhampton Hill, which had caught the rain a bit more heavily than the rest of the route. On top of a very hard base there was a centimetre of slippery mud that was pretty treacherous.

As before, route finding was very straightforward. The Cotswold Way is well signposted and the path was clear to follow. My only beef would be that occasionally the route loses hard-won height for no discernible benefit. I think the worst example of this is on Cleeve Hill. Cleeve is the highest point in Gloucestershire at 330m, and although the path doesn't quite hit that high point, it's not far off. Yet as you head south towards the three distinct radio masts, the path drops down the side of the hill. This section is quite pleasant, but then you enter the Bill Smyllie Butterfly Reserve and things become less so. Initially this isn't too bad, but then you climb and the path leads you through a narrow valley, the bottom of which gets chewed to hell by horses and cattle. It's lined with thorny trees, there's no view and the going underfoot can be abysmal. I had the misfortune to cycle through here when it was particularly wet and it was truly, truly horrid. 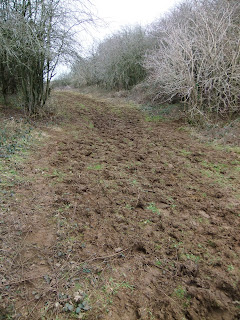 The Valley of  Death

What make this particularly galling is (1) you're going to need your hillclimbing energy later on, and yes, I am looking at you Lineover Wood and Wistly Hill, and (2) you can bypass it very easily. If you want to do as much of the official route as possible, then carry on in to the butterfly reserve, but rather than heading in to the valley, climb up to the left and follow the clear path until you merge once again with the route. If you would rather not lose too much height, then instead of dropping off to the right before the radio masts, continue on to them. Go through the gate and walk about 200m along the road until you come out of the trees, where you should spot a small gate on your right. Through this into the butterfly reserve, stay above the small copse and again, aim above the valley for a much better path.

For those of you interested in the hostelry potential of the route, and I know there are some of you out there that will be, this is going to be a tough section. In fifteen miles today, I didn't go through anything that could be described even as a hamlet, so shops and pubs were thin on the ground. Don't completely give up hope however. On top of Cleeve Hill there is, bizarrely, a golf course. And where there are golfers, there will be a clubhouse. And this clubhouse is open to the public. It advertises hot and cold food and drinks, so could be worth a stop. I can't vouch for quality as I didn't stop, but beggars can't be choosers. A little further on you can drop down to the road to the Rising Sun which is an oddly named pub, facing west as it is. Again, I didn't stop as the climb back up to the route is pretty gruelling. Next, the Harveys map shows a pub close to the crossing of the A40, bad news, it's not a pub. The Reservoir Inn has had many changes of ownership over the years, and it's never really thrived. It's now an Indian restaurant called Koloshi which could be good but probably isn't going to be the long-distance walkers first choice, if indeed it's even open as you pass.Then you've got the pub at Seven Springs. I'm not going to link to it, as I don't particularly like it. I have found the staff to be disinterested, the place grubby and the food very average. It's one of those "big plates of unexceptional food" type of pubs. Your choice. And that was it for pubs. It's ironic really as for large parts of the day you're looking down on Cheltenham and environs, a town crammed with exciting opportunities for revelry!

If you're camping, there are places that would hold a tent, although I would add that Cleeve and Leckhampton in particular are very popular with the local cyclists/walkers/dog walkers/power kiters/horse riders, so you may need to hunt around off the beaten track. 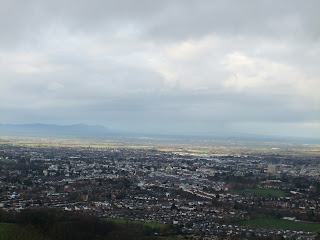 I can (honestly) see my house from here...

It was an interesting days' walk: Cleeve and Leckhampton Hills are places I know very well, having walked and cycled over them a great deal. Linking them together as part of a longer route is a different experience and involved seeing them in a totally different way.

In total, I reckon I've done somewhere in the region of 35 miles in my two walks, so I'm about a third of the way to Bath.

Keep posted for the next thrilling instalment! 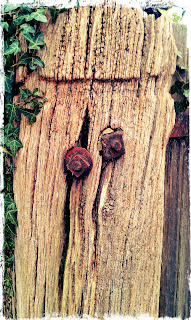