I had hoped to knock the Cotswold Way off over the winter and spring. For a variety of reasons this didn't happen. Weather, time, moving house: excuses I know, but valid ones!

One of the perks of moving is that our new house is only about a ten minute walk from the Cotswold Way, so this leg would actually be walking home (and rather splendidly the next leg will start from my front door!)
Last Wednesday I set out at about half seven to walk up to the main road, where I would catch the number 46 bus to the outskirts of Cheltenham. Rendezvousing with Chris, my walking buddy for the day in a pub car park (strangely prophetic of the day ahead) we drove up to my finish point from the last leg. Sadly, roadworks meant the road up the hill was closed so we had to park much lower than we wanted to. This added an extra couple of ks to our day, but seeing as it wasn't going to be too strenuous we grinned and bore it.

This particular stretch, from Leckhampton to the outskirts of Cranham, was fairly wooded, which in light of the hot sunshine was well received by us both. 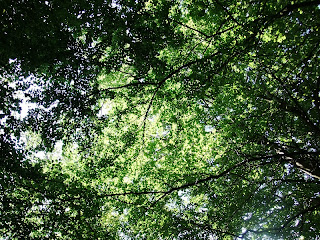 Skirting around Leckhampton Hill we picked up where I had previously left off and wended our way towards Crickley Hill. 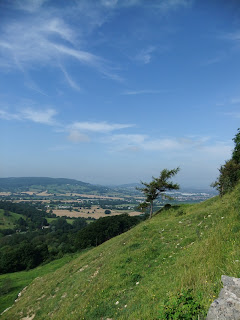 We availed ourselves of the ice cream purchasing facilities at the small but interesting visitor centre before pressing on. Shortly we came to the most unpleasant bit of the Cotswold Way so far. 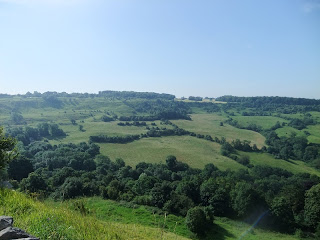 The A417 runs below the trees before heading up and over the horizon.

The A417 has to be crossed, and then you walk up the hill alongside the nose-to-tail traffic for a few hundred metres before you can peel off in to the fields again. The crossing is a real life-in-your-hands moment. Yuck. Nestled in the elbow of this exceptionally busy junction is the Air Balloon pub. We were early so it was shut, but frankly I cannot understand why you would want to stop here. 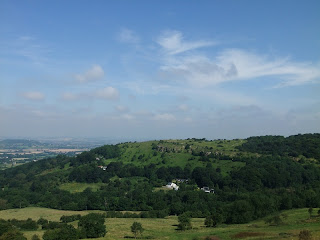 Looking back at Crickley Hill

We pressed on towards Birdlip through most pleasant woodland. 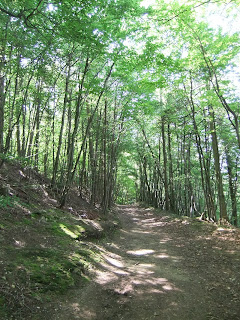 Below Birdlip we spied some crags tucked away in the woods. Always on the lookout for new climbing spots Chris peeled off left for a look. Sadly our hopes were dashed. We realised that what had on first glance looked like an exciting little spot to while away a few hours was in fact a chossy death-trap! The stone was flaky and hollow sounding with scarcely anywhere to put pro. If you did manage to get off the ground you ran the very real risk of pulling down tonnes of loosely stacked rock on to you and you foolhardy belayer. 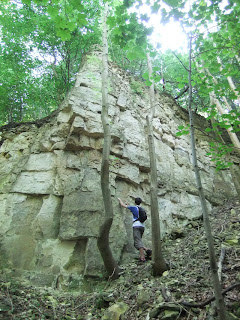 We gave it a miss and headed on. To console ourselves we headed up to the village of Birdlip where by happy chance we found the Royal George. As it was only just 11 (ahem) we had the place pretty much to ourselves. We ordered some beer, and a couple of ciabattas. We were momentarily perplexed when the barmaid asked Chris how he would like his chicken cooked. He decided on "Thoroughly".

After we had rested and aired our feet for a bit we decided we must press on. We dropped back down the hill and picked up the well waymarked trail again. 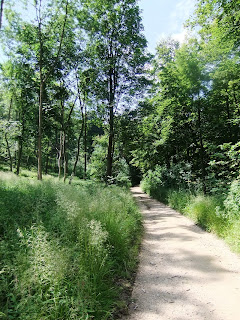 Catching lovely views of our route so far we strolled through the woods on our way towards Coopers Hill. If you have ever seen footage of the charming English custom of cheese rolling, this is where it happens. It is a very steep bit of hill, and the Cotswold Way passes below it and then, after a painfully steep climb, the top of it. 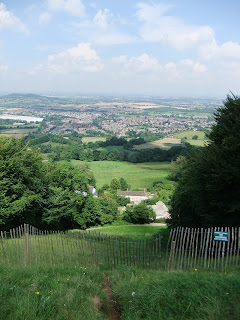 Looking down the cheese rolling slope.

A couple of notes here. As you come out of the woods below Coopers Hill, the Harveys Cotswold Way map shows a cafe. Whilst we saw the building and the signs, it certainly didn't appear to in use any more, so don't count on it. A further point is that the waymarking post at the top of the hill points towards two fairly close paths. We took the left hand one which as it turned out was the wrong one. Go right! After a brief and not unpleasant detour we were soon on the right road, and headed on through the woods towards the A46, and the Royal William.

Further refreshment was taken here, before we dropped back down to my place after a very relaxing twelve mile stroll along the edge of the Cotswolds.

The next leg will start taking me in to unfamiliar territory. Hopefully not such a long break between updates!

Chris, I hope you don't mind but I nabbed a couple of your Instagram pics..?
Posted by Kenburg at 21:23